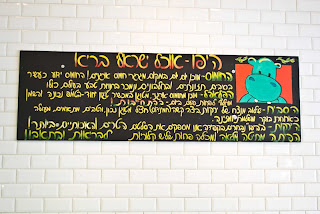 If you were to stand on Dizengoff, stop ten people, and ask them, “What’s your favorite place to eat falafel in Tel Aviv?” you’d probably get around ten different answers. Ok, at least eight. The point is every Tel Avivian has their most coveted falafel joint, the place they swear won’t disappoint, that they happily give their business to and recommend time and time again. 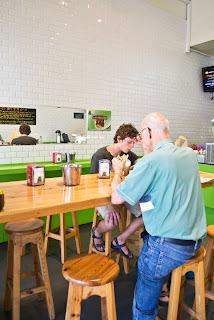 But what about organic falafel? If you repeated the above experiment but asked passersby for their favorite place to eat healthy falafel, then you’d probably get the same ten responses, which would most likely be Hippo Falafel. With two locations opened in the city center in the last five years, Hippo is the place for healthier salads, falafel, and hummus that are delicious without the inflated price tag often associated with organic food.

Dima Kaminsky worked in the falafel business for many years before the mid-1990s when he noticed a healthy, organic food trend in Tel Aviv. He realized no such thing existed for falafel, a meal often associated with “deep-fried” and “fast food”. “All the ingredients in a falafel are healthy, but when put them together it can become unhealthy,” said Ido Breier, Hippo’s long-time manager. “People in Tel Aviv want to eat Israeli food but they won’t because it’s not healthy enough for them.” Thus Kaminsky set out to create a more nutritious falafel, and not just the balls but the whole sandwich and all its components.

He tested different ways to prepare falafel balls and discovered when frying falafel in canola oil it creates a fluffier ball that absorbs less oil that is “not good but not bad”. In addition, he invested in a specific deep fryer that extracts the oil while the falafel is being cooked. When the falafel is ready it is left without a single extra drop of oil. 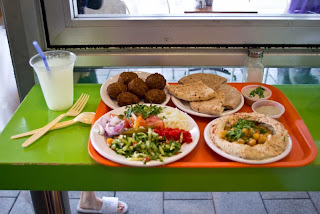 Kaminsky further uses a recipe that satisfies the needs of his healthier and diet-restricted customers, such as those with a gluten intolerance. While Ido, shied away from sharing Hippo’s “secret” falafel ingredients, he did emphasize the elimination of flour, which creates a less dense, moist falafel ball. 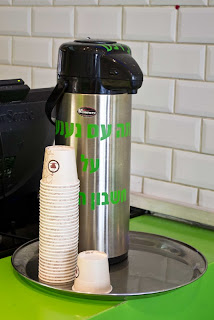 This was my impression of Hippo when I tried it for the first time some months ago. The falafel wasn’t dry or too crunchy as other eateries in Tel Aviv. I didn’t get oil all over my lips and fingers. It was tasty, almost tastier than the other falafel places in Tel Aviv that I’d frequented for years, and it was a pleasure to eat. This is also the fresh factor: Ido and his kitchen staff arrive at seven each morning to prep, cut, and cook the ingredients that is delivered daily from the market. And it pays off: aside from the yummy falafel, the sauces and salads supplied as add-ons taste crisp, natural, and are packed with flavor.

Hippo doesn’t use any food colorings or added preservatives. Pita comes in white, brown, or soy. Chickpeas for the falafel and hummus are grown on chemical-free organic farms. The salads and sauces are classics with a twist: “green tahini”, a parsley and tahini puree, chimichurri, savory tomato salsa, and quinoa salad with mint. And everything is fair game: you’re welcome to all the salads behind the counter and all ten sauces at the do-it-yourself condiment bar (those are unlimited, so I highly recommend ordering your falafel to stay). The restaurant is named after a vegetarian animal, and the ingredients are so nutritious and fresh it didn’t offer fries on the menu until three months ago due to local pressures. Bottom line: this is the place to eat for a filling, healthier meal and when you want falafel minus the calorie count. 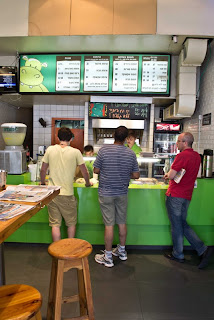 And what price do you pay for this wholesome sandwich? Twenty shekels for a plate, 17 for a falafel, and 11 for a half (but get this: it’s a shekel less at the Dizengoff location). Ido actually claims Hippo has the biggest “half falafel” in Tel Aviv because they only cut off ¼ of the pita. Did I mention you sip green tea on the house while waiting for your order?

“We believe when everything is fresh it’s better,” said Breier. It tastes better and it’s best for our customers, who are seeking healthier choices in what they’re eating.”
Posted by Taste TLV at 10:01 AM